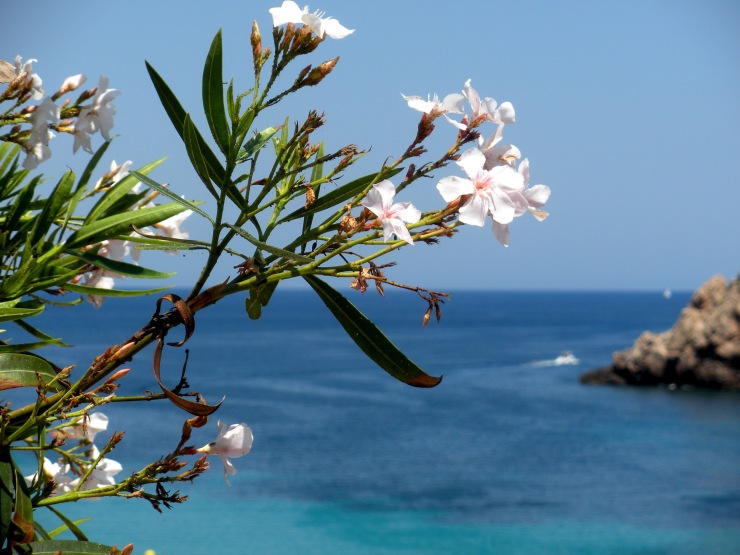 My first few weeks in Menorca have passed smoothly. What I find important to share is the rich amount of culture this one island contains. I’ve compiled a list here of some typicals of Menorca, and my personal experience with encountering them.

“¿Dónde están mis abarcas? ¿Dónde están mis abarcas?” Kailua runs around the house and I can only think, what is she looking for? Her boat? The slight difference I missed is a single letter. Barcas=boats, Abarcas=shoes. But not just any shoes…abarcas are like the trademark of Menorca. Upon arrival in Spain, I visited my previous host mom from Madrid. She told me I will have to get a pair while I’m in Menorca because even the Queen was wearing them when she visited not long ago. Joan tells me they are the shoes that will never, ever, ever fall apart. They may look older, get a little dirty, but they are as durable as they come. Several brands exist that sell abarcas, although not all are created equal. The locals know where to find the best and the most authentic, according to their standards. I was privileged enough to take a back stage look into the factory where employees are given first priority for sales. A friend of a friend of a friend (hey we’re all family here) owns this particular brand and gave me quite the discount. I hope I picked a good pair since they’re supposed to last the rest of my life… 🙂

Out for the first time since my arrival, I’m standing in a group of 20-somethings at a concert in Ferreries. Near the back, we’re enjoying basically the only “entertainment” the town has to offer on a Friday night. The band shouts in Menorqui while the crowd, mostly high-strung teenagers with mullets, jumps around to the beat. Maximum 75 people in the entire area, all from the same town, my friend Alba is able to point out the Math teacher, the grocery store owner, her friends’ aunt, and the florist. As I’m finishing my beer, I spin around to find my friend holding an array of yellow shots, handing them to each of us. I ask what it is and I get, “It’s like gin and lemon drink”. Gin? No, but really…gin?? I can’t drink it. It will taste like juniper berries mixed with grass from my backyard. Why would someone want me to drink this? Salud!! (Cheers!!) The glasses go up and the drink goes down. But wait..this is not gin. It can’t be. It’s fantastic. It’s delicious. It’s… pomada.

Menorca has its own Xoriguer Gin distillery, so this stuff is fresh. The typical drink, pomada, is made with Fanta limon, gin, and occasionally added special ingredients.

“Prepara la camera!”, Joan shouts to me from the front of the boat, and through the loud claps of the waves I attempt to decipher what he’s telling me. “Get your camera ready!” Seconds later we’re driving directly through a rocky cliff and straight toward a cave. Jacky pulls out a couple paddles ensure we can push ourselves away from the inside walls. The water is the deepest blue and it crashes repeatedly against the rugged sides of the southern coast. I can’t take my eyes off the picturesque views around me: white, sandy beaches; teal, clear water; tall, jagged cliffs. In one boat trip, we explore 6 different coves, each offering their own enchanting features. Not bad for a Saturday afternoon.

Known as the “untouched” of the Balearic Islands, Menorca offers some of the most beautiful ocean views. It is famous for having hundreds of caves, which people once used for housing.

I’m clinging on to the side posts of a stage near the intersection of a street for a better view. I can see nothing but dense amounts of Spaniards filling every inch of the streets in all directions. The sweet smell of pomada mixes with the cigarette smoke in the air. I can feel the crowd getting excited, the noise level rising. The horses are coming.

Belonging to a country known for running with bulls, the spirit of this island is at home with Spain. I hold on close, keeping some distance from the main stream, while enormous, gleaming, ebony horses begin to make their way through the thick crowd. The riders are decked out in glamor, but not nearly as much as their rides. The people chant “Bots! Bots!”, hoping the rider will get the horse to rise up on two hind legs, the true crowd thriller. As it is considered good luck to touch the horses, Menorcans try their desire for danger and grab the sides at any moment. 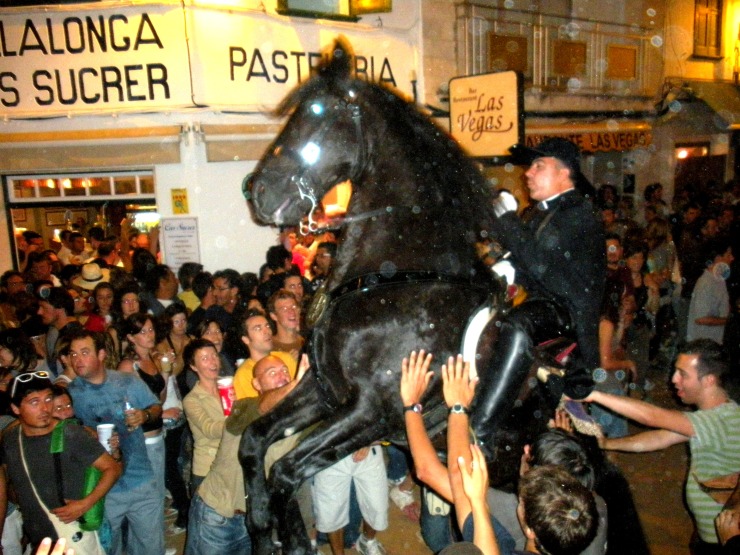 The summer buzz of the island, these festivals are held on Saturdays/Sundays during July and August, in honor of particular saints. They date back to the 14th century and each town has their own. Ferreries has been preparing all year for August the 22nd, the feast of San Bartolomeo.